Approaching Alcatraz Island from the ferry.
“You are entitled to food, clothing, shelter, and medical attention. Anything else you get is a privilege.” Number 5, Alcatraz prison Rules and Regulations, 1934.
Alcatraz was an island that showed on maps, but was not built upon until the Gold Rush.  With heavy gold activity, San Francisco’s population boomed from 300 to 20,000 citizens between 1847 and 1849.  The Fort of Alcatraz was part of the military strategy for keeping SF Bay safe– one fort on either end of The Golden Gate Bridge and one in the middle of the bay, Alcatraz.  In 1907, Alcatraz was decommissioned by the Army.
It was not until 1915 that Alcatraz got a new name, “United States Disciplinary Barricks, Pacific Branch”.  Some housed there included objectors to World War 1.  1934 marked the year that Alcatraz became a federal penitentiary.  Those most known for their crimes each have nicknames:  Al Capone– ‘Scarface’; ‘Doc’ Barker; Alvin Carpis–‘Creepy’; George Kelly–‘Machine Gun’; and of course, ‘The Birdman of Alcatraz’, Robert Stroud.  The prison was closed in 1963.

The nick name for Alcatraz, is “The Rock”.  There was no soil on “The Rock”–so, it was brought from a nearby location, “Angel Island”.  Angel Island was the West Coast equivalent to Ellis Island in the East, and still can be visited today.

The brief history provided above and the  identification of buildings following, is based on a brochure published by Golden Gate National Parks Conservancy, “Discover Alcatraz A Tour of the Rock.”  A great $1.00 investment to accompany the tour of the island. 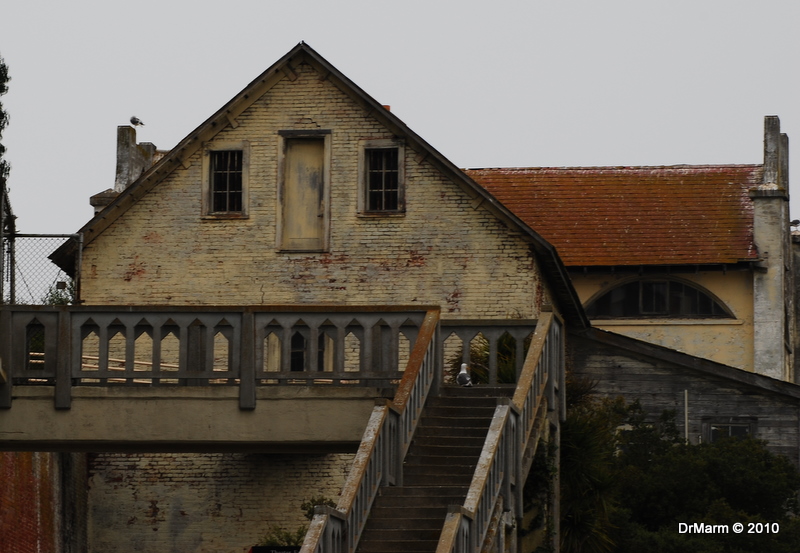 Believe this is the Military Chapel 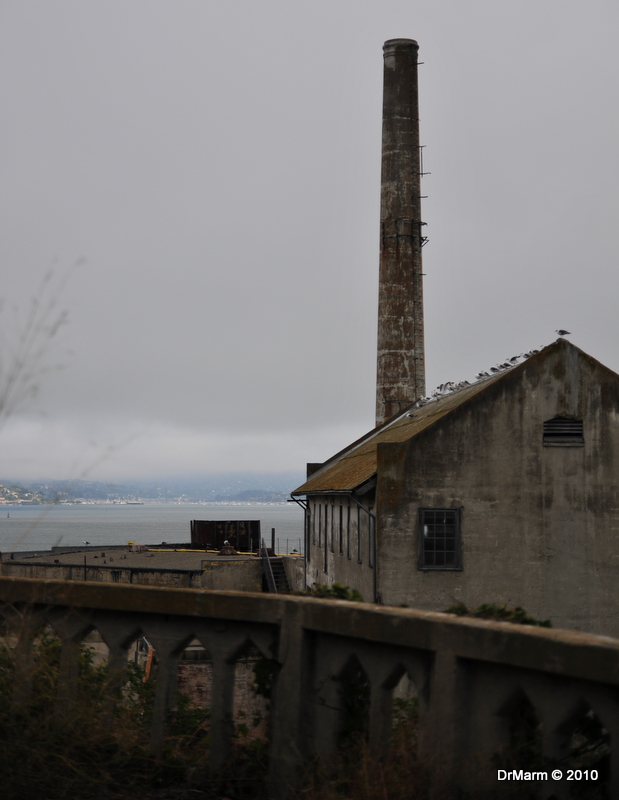 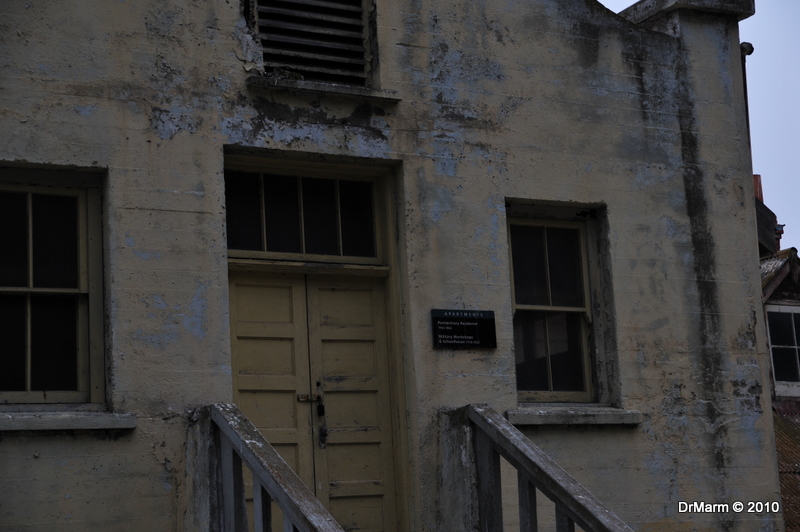 This is the Guard Tower–imagine the 360 degree view must be stunning!

Long forgotten bucket, with some flowers along the walk way to what was the Warden’s home.

Clean up on aisle 9 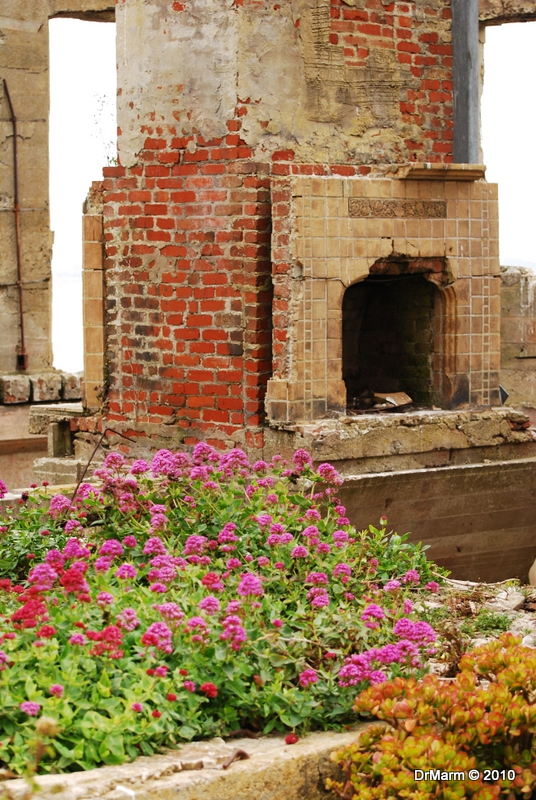 Bet this fireplace was used a lot!

View from in front of Warden's home 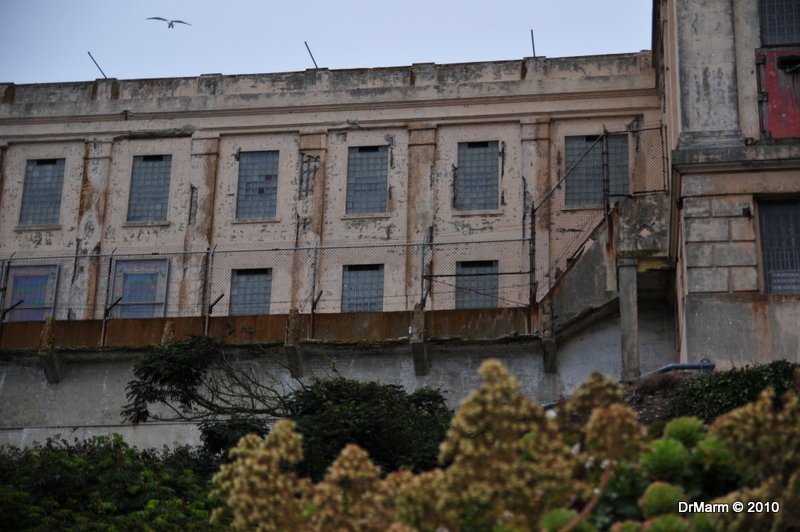 Prison above the yard

And now…inside the cellhouse.  An audio tour is available and runs about 45 minutes.  I shared this shot to show the width of the aisle as well as the number of heads that are on the tour!  It is impressive to watch the number of visitors moving along the tour as the head phones guide you from location to another.  The number of visitors to Alcatraz is monitored each day–so if you plan on going, be sure to book early.  Another clever act, I imagine to limit your stay is the fact–no food is sold on the island.  Water for sale, but that’s all.  Gotta get back on the ferry to go get food. 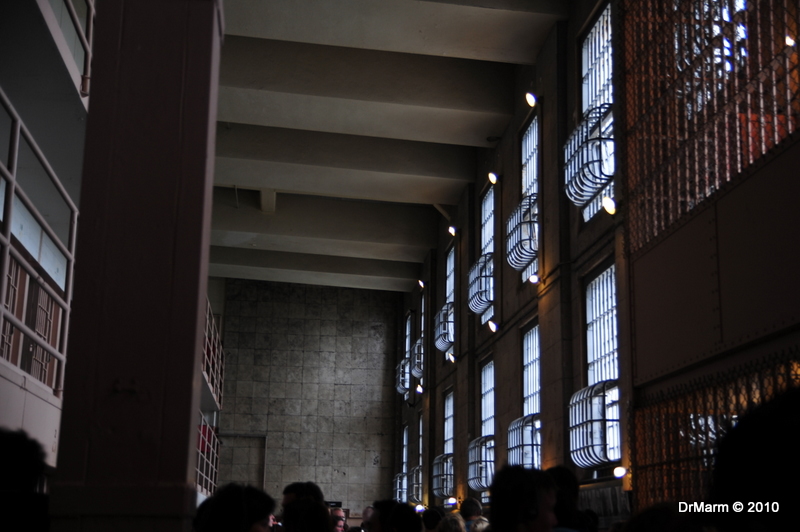 3 Floors, cells from top to bottom

Every cell had a number above the entry. 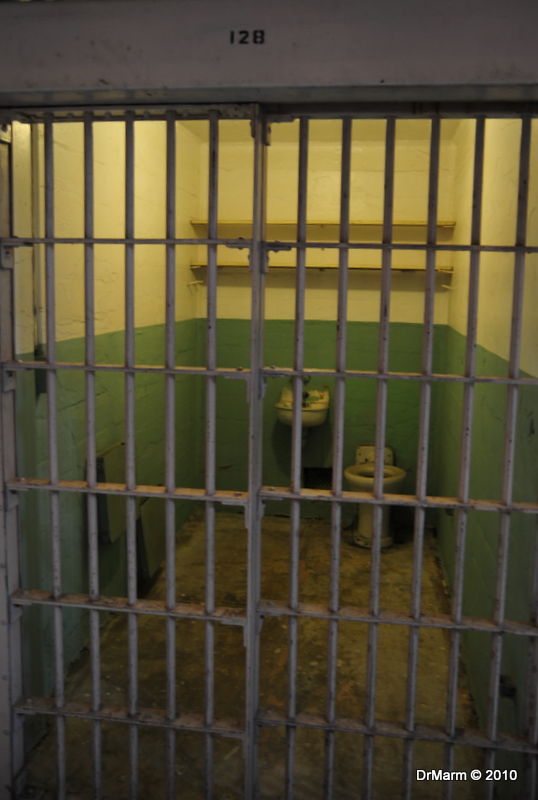 Shoes do show a bit of the era, don’t they? 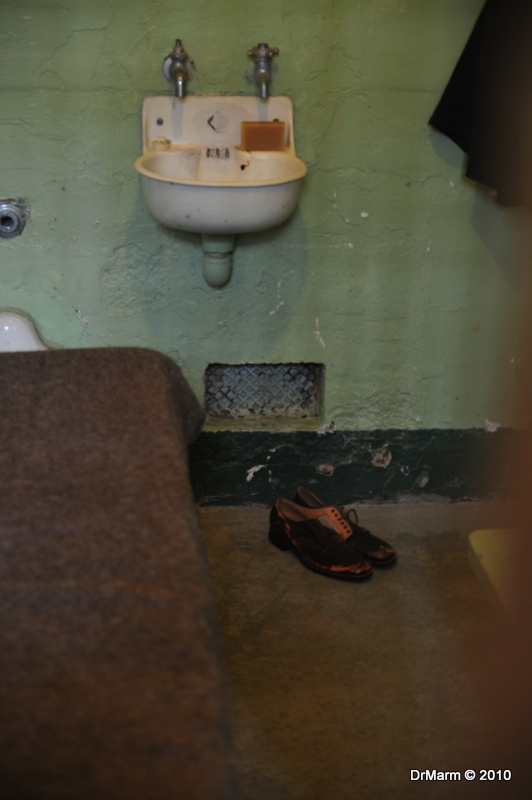 To anyone who has ever visited the San Francisco Bay Area–they can tell you how down right cold it can get, even in the middle of summer!  We visited at the end of July and did not see much sun at all. 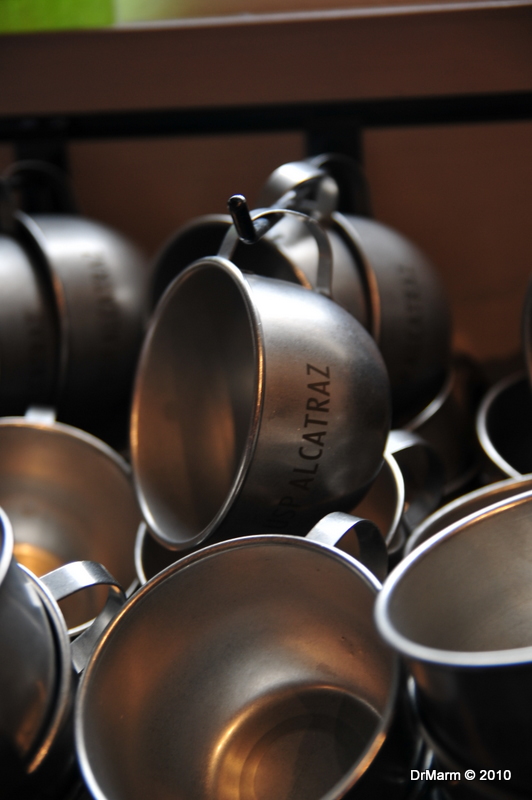 Not sure if these were fashioned after the real tins…

One of the next posts will be of Cavallo Point–the fort built on the North side of The Golden Gate Bridge.  Now, Cavallo Point Lodge occupies the ideal setting and is a fabulous place to visit and stay.

This entry was posted on September 4, 2010 by DrMarm. It was filed under Uncategorized .